The Revised Rules clarify the formalities and procedures for the establishment, alteration, and deregistration of commercial entities (including corporations, partnerships, limited partnerships, proprietorships, sole proprietorships, companies, or individuals) operating in Shenzhen. We shall introduce the key amendments as follows:

Simplifying the Process of Company Establishment

The Revised Rules have simplified the process and requirement in company establishment registration. This makes it easier for foreign investors to invest in Shenzhen.

Comparison between the Previous Rules and the Revised Rules are as follows: 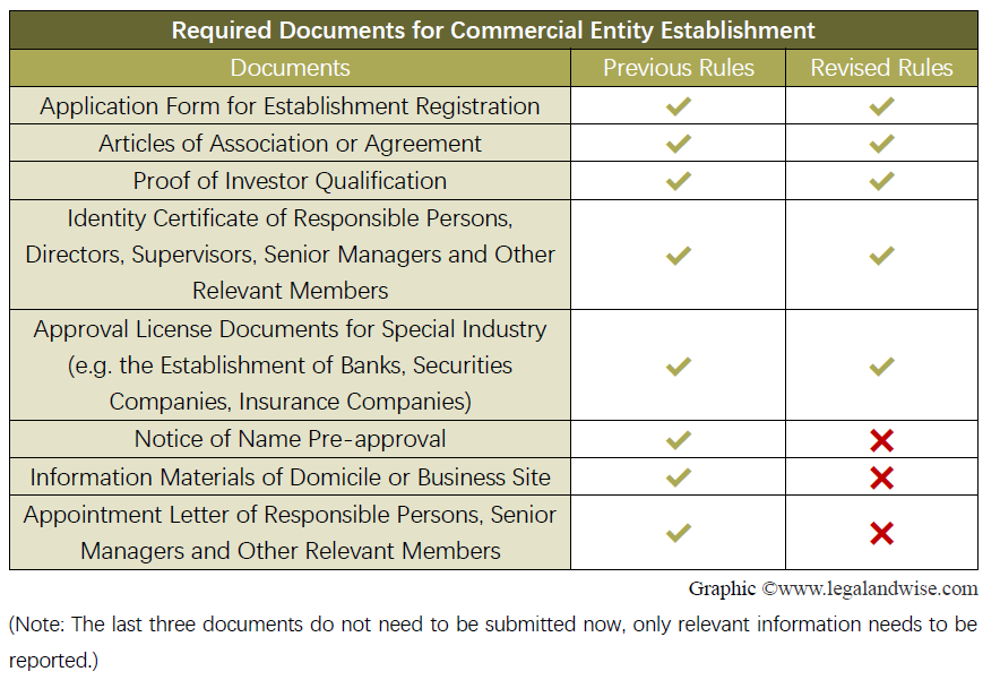 Now, in order to promote the development of regional integration in the Greater Bay Area, the Revised Rules allow enterprises registered in Hong Kong or Macao to directly obtain business licenses and engage in production and operation activities other than the negative list for foreign investment access. In addition, with such business licenses, they may also handle matters, such as bank account opening, taxation, customs, foreign exchange accounts.

However, the Revised Rules currently do not specify the details about how investors from Hong Kong and Macao can directly obtain business licenses. The specific details shall be worked out separately by the Shenzhen government.

In this case, especially after the outbreak of COVID-19, SAMR published the Measures on Further Optimize the Business Environment and Better Service Market Subjects on August 20, 2020. Since many commercial entities need to suspend their business in the short term when they faced business difficulties during the epidemic period, these measures firstly proposed the "dormancy" registration system for a trial. This system allows commercial entities to apply for "dormancy" according to the actual needs of production and operation. During the period of "dormancy", such commercial entities shall not be included in the list of abnormal business operations if the relevant administration of market regulation cannot contact the commercial entities through their registered domiciles.

However, in this revision, it does not specify the identification standard of "not engaging in business activities" for dormant commercial entities. It should be noted that there is no rules or regulations regarding the period of dormancy in the field of taxation, social security and other administrative management in China at the present. In practice, many practical problems may be encountered, such as:

It is clear that it requires further study and development of relevant rules or regulations by taxation, social security departments and other administrative management in China.

Allowing One License for Multiple Branches in Shenzhen Different Districts

Shenzhen has taken the lead in the implementation of "one license for multiple sites, one license for one district" in China since 2013. This Revised Rules expand the scope of "one license for multiple sites" and no longer require new branch of commercial entity operating across different districts in Shenzhen to apply for the new business license. Such commercial entity may merely add the information of the new branch into its current business license. This will greatly save the time and cost of expanding branches in Shenzhen, especially for chain-like enterprises.

Now, commercial entities conducting business activities such as e-commerce, consulting, planning and other business that do not need a fixed domicile or operation business site, can entrust qualified business secretary enterprises, accounting firms, law firms or any other entities with domicile custody to provide the virtual address services.

Shenzhen has a strategic position in the development of the Greater Bay Area and plays a role as an important support pillar of the “Belt and Road” Initiative. The Revised Rules will certainly bring more opportunities for above roles in Shenzhen, and further attract foreign investment.

In the meanwhile, as some provisions will need to be clarified through supplementary measures before they can be implemented, it is suggested that commercial entities with investment needs in Shenzhen pay attention to further legislative developments.

If you have any legal questions regarding investment or company establishment in Shenzhen, please feel free to contact us via administrator@legalandwise.com.